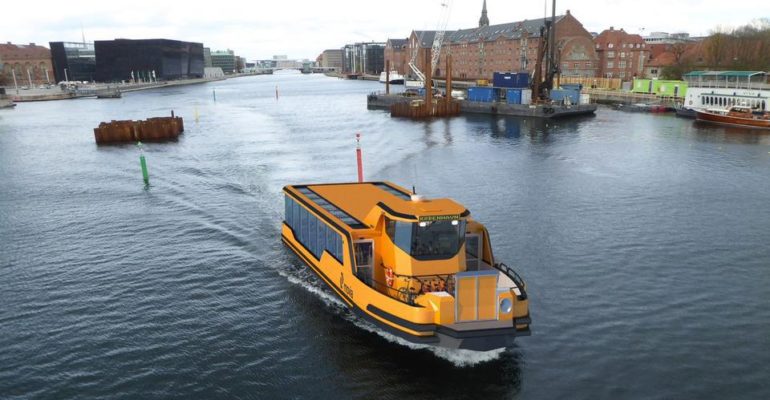 Several cities around the world have water or harbour buses, including Copenhagen (pictured above). Why not Nuuk?

The city of Copenhagen decided in 2018 to replace the fleet of harbour buses with fully-electric ones, thereby reducing the noise and air pollution.

Nuuk has lost it’s connection to the sea as a way of transportation. Umiaq boats and kayaks was once a must have mean of transportation. Today, most people in Nuuk have a dirty fossil-fuel car even though there’s only 8 km from one end to the other end of Nuuk. During rush hour the town’s roads can barely handle all of these cars, but the harbour is unused.

GreenGreenland would like Naalakkersuisut (The Government of Greenland) or the Sermersooq Municipality to invest in green harbour buses that could serve the town of Nuuk.

The above image is a quick mark-up of 8 possible stops on a Nuuk harbour/water bus service.

A Nuuk Water Bus service would free up space on the roads and in the ordinary buses, as well as help ordinary people get from A to B in their daily life. Each of Copenhagen’s future electric harbour bus has a capacity of 80 people, 8 bicycles and 4 baby prams. Such a capacity would help families with children in Nuuk. It would also be a tourist attraction in and of itself.

A direct route from Qinngorput to Queen Ingrid’s Hospital or the Colonial Harbour would be a quicker way for people to get to work in the town center or to their hospital appointment.

Harbour buses would also be cheaper than building tunnels or bridges if and when the future neighborhood Siorarsiorfik is build, or if the politicians finally come to their senses and decides to build the Nuuk International Airport south of the town – instead of in the middle of the town itself.